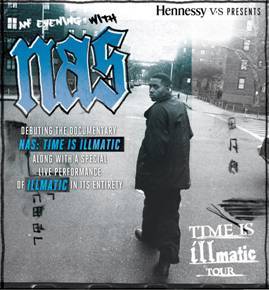 Nas will be kicking off a North American Fall Tour on October 2, 2014 in Rochester, NY (see below for full tour routing), in conjunction with a special screening of his documentary film, Nas: Time is Illmatic. Each show on the tour will be a special event where the film will screen followed by Nas performing Illmatic start to finish. The film will open theatrically via Tribeca Film beginning in New York on October 1st, with a national expansion to follow. It will be available on demand and iTunes starting October 3rd. The tour and the theatrical release of the film will cap off Illmatic’s 20th anniversary celebration.

Nas: Time is Illmatic follows the trajectory of his 1994 landmark debut album, Illmatic. It traces Nas’ influences and the insurmountable odds he faced in creating the greatest work of music from hip-hop’s second golden era. The documentary is directed by multimedia artist, One9, written by Erik Parker, and produced by One9, Parker, and Anthony Saleh. The film was supported by The Ford Foundation’s Just Films, Tribeca Film Institute’s Tribeca All Access program, and Hennessy V.S. to help bring Nas’ inspiring story of tireless pursuit of excellence to audiences nationwide.

"I want to thank Robert De Niro, Jane Rosenthal, and the Tribeca Film family for all of the love and support they've given Time Is Illmatic,” said Nas. “It is an honor to be in partnership with them, and I feel there is a cultural kinship bonded by the city of New York."

“When we started this project, Erik Parker and I couldn’t imagine that audiences would one day be able to experience the film with a live performance of Illmatic, the album that started it all. It will make each night a truly special moment for the culture. We are sure people of all generations will be inspired by the story of Nas, the Jones family, and electrified by a live performance,” said One9.

Nas recently released a special 20th Anniversary edition of the album, titled Illmatic XX. PRESS HERE to download it now. In support of the album, Nas will be going on tour this upcoming fall.

*Will not be screening Nas: Time is Illmatic

Nas emerged from the Queensbridge neighborhood of Long Island City, a hotbed of rap artists since the 1980s.  The son of jazz trumpeter Olu Dara, he has since gone on to sell over 20 million albums worldwide over the span of his legendary career, and has acted as an ambassador for hip-hop culture throughout the globe. Since the release of Illmatic, he has released 9 solo albums and three compilations all of which have been certified double-platinum, platinum and gold. Before Illmatic XX, his most recent release was 2012’s Life Is Good, which debuted at #1 on the Billboard Top 200, marking the sixth #1 album that Nas has produced in his career. The collection also received four GRAMMY nominations bringing the rap icon’s GRAMMY recognition count to 13 overall.

Film Tribeca Film is a comprehensive distribution label dedicated to acquiring and releasing independent films across multiple platforms, including theatrical, video-on-demand, digital, home video and television. It is an initiative from Tribeca Enterprises designed to provide new platforms for how film can be experienced, while supporting filmmakers and introducing audiences to films they might not otherwise see. Current and upcoming Tribeca Film releases include Gia Coppola’s Palo Alto, David MacKenzie’s Starred Up, and Alex Ross Perry’s Listen Up Philip.